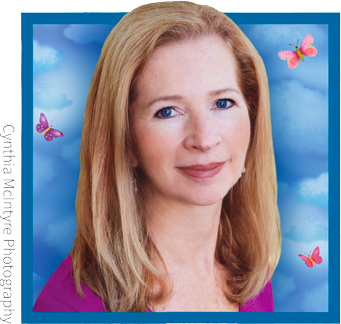 Victoria Kann is the award-winning illustrator and author of the picture book series featuring the whimsical and effervescent character, Pinkalicious. Victoria co-authored and illustrated the first two books, Pinkalicious, Purplicious as well as the play, Pinkalicious The Musical. She wrote and illustrated Goldilicious, Silverlicious, Emeraldalicious, Aqualicious, Peterrific, and is working on several more books about the adventures and antics of Pinkalicious.

The Pinkalicious character was inspired by Victoria's real life daughters – two girls with vibrant imaginations who love cupcakes, dress up, playing princess, and all things pink. Recently Victoria's husband, a toy designer, built a tree house for their Princess Pinkerbelles. She often hears galloping in the house and wonders if it's Goldilicious or just her Pinkerellas.

Victoria is the co-executive producer of Pinkalicious & Peterrific on PBS Kids.

How did you come up with the idea for Pinkalicious?

Were you like Pinkalicious when you were a kid?

As a child (and adult) I have eaten many cupcakes and have only gotten wider, not pinker.

Pinkalicious has many qualities that I admire. She is a girl who has an incredible imagination. She knows what she likes and is very brave and courageous. Pinkalicious stands up for what she believes in. When she does something wrong she learns from her lessons. Wherever she goes there seems to be a bit of magic and a lot of fun.

Which comes first, the story or the illustrations?

The story comes first, but as I work on the artwork I often modify the story. Sometimes the story is inspired by what I want to draw. Everything flows together.

How long does it take to create the illustrations for each book and what is your technique?

The artwork takes a long time, almost a year. The illustrations are created using a combination of different mediums. I create a paper collage, which I scan into the computer and paint on, scale, and “play with” in Photoshop. I also scan in pictures that I take, as well as maps, fabric, wallpaper and anything else I can think of. Anyone who is reading this might want to try collaging. You don’t need a computer. Just get a glue stick, a surface to glue on, and any kind of paper you can find to use as collage material. You can use wrapping paper, food packaging, construction paper—anything! Try making a collage of faces.

Make a happy face, a sad face, an angry face, and a surprised face. Will your illustration be of a boy or girl? What kind of hair will you give it? Just have fun and see what happens!